In reality, a Buhari-Obasanjo showdown 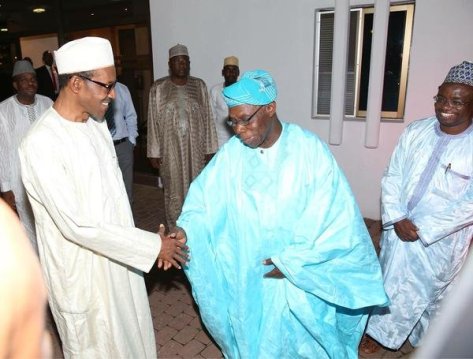 Duro Onabule
Officially, the 2019 presidential election in Nigeria is between incumbent Muhammadu Buhari and ex-Vice-President Atiku Abubakar. But in reality the contest is between Muhammadu Buhari and his former Commander-in-Chief and one of his predecessors, Olusegun Obasanjo. Long before Atiku’s entry into the race, not to talk of his picking up the presidential ticket on the platform of PDP, Obasanjo had thrown his challenge to Buhari, dismissing, in the process, his (Buhari’s) merit for the routine second term. The nearer the election drew, the more confrontational, the more daring, sometimes, the more reckless and the more hypocritical Obasanjo became.

This irritant (as he was described by retired Lt. General Alani Akinrinade) became so repulsive that the former Chief of Defence Staff, in a well-advertised open criticism, had to fault Obasanjo’s judgement (in effect, criticism of Buhari) as no less deplorable as Obasanjo’s past record.

That, it emerged, was just only one in the series of drama recorded in the build-up to the elections. The hope, if not the excitement, raised by the registration of some 90 political parties since dwindled into near farce. Similarly, it was proper that Buhari signed into law the so-called “not too young bill,” which, it was hoped, would encourage the agitators to justify their case. Otherwise, bedlam might have been let loose against those “denying them” their rights. Unfortunately, the two measures only succeeded in exposing the lack of seriousness and desperation for cheap political aspiration of those concerned. Forty so-called newly registered political parties declared support for and endorsed the candidacy of President Buhari while another 40 of the parties similarly opted for PDP’s presidential candidate Atiku Abubakar. Was that all the purpose of registering such a large number of political parties or reducing the age for qualification for holding public office?

No less ridiculous in the build-up to the elections were the disgraceful antics of the so-called cultural organisations – Afenifere, Ohanaeze, Northern Elders Forum, Arewa Consultative Forum, etc, as they, one after the other, refused to be outdone in endorsing, or even openly split to endorse their preferred candidate out of the only two who seriously lasted the race – President Muhammadu Buhari as the APC and former Vice-President Atiku Abubakar.

What is more, these cultural organisations, over the years, neither served community interests nor failed to earn notoriety for backing wrong causes. In 2014, a splinter three-man faction of Afenifere endorsed former President Goodluck Jonathan on the excuse that he would restructure Nigeria. The same Goodluck Jonathan who, for most part of his six-year tenure totally rejected all agitation for restructuring. Similarly, in 2006, Ohanaeze, under the leadership of Chief Joe Irukwu, was the only group which openly supported Obasanjo’s third term (a euphemism for his life presidency) agenda. Therefore, there is nothing new or alarming in the latest bogus endorsement of presidential candidates.

Some members of Northern Elders Forum (have) alleged that the endorsement announced for PDP’s candidate, ex-Vice-President Atiku Abubakar was a decision without any mandate or meeting of the general body of the forum. Therefore, the Arewa Consultative Council discarded its long-standing convention and announced the endorsement of APC’s candidate, President Muhammadu Buhari. All these cultural groups are merely seeking relevance just like the self-promoting pollsters in and outside Nigeria. Accordingly, neither President Buhari nor former Vice-President Atiku Abubakar should be buoyed or demoralised by these tricksters. Ordinary Nigerias will determine the outcome of these elections. As a repeat, Nigerias already made up their mind and won’t be influenced one way or the other by any “yeye” endorsement from any quarters. Imagine foreign-based pollsters already somersaulted in favour and against the two leading candidates – Buhari and Atiku.

The 2019 election will surely shatter long-standing myth, which, during the campaigns, assumed a more puzzling dimension. There was the tumultuous crowd at Kano for the campaign of each of President Muhammadu Buhari and former Vice-President Atiku Abubakar. Hot debate ensued on who of the two pulled more crowd. In fact, the PDP was so alarmed by Buhari’s crowd and had to dismiss the feat with the allegation that the APC imported foreigners from neighbouring Niger Republic. Then the PDP also attracted such huge crowd, which raised counter-allegation whether PDP also imported indigenes of Niger Republic. Whichever was the case, did the Kano crowd in either case necessarily comprise voters for Buhari and Atiku, respectively? As was Kano, so it was in Kaduna, Zamfara, Borno, Katsina, Taraba, Kebbi, Sokoto, Adamawa, Plateau, Bauchi, etc.

Campaigns for the elections, compared to the past, have also been rated as the least expensive. Past elections featured free flow of loose, unquestioned and unexplained funds all over the place. All the same, Atiku Abubakar spent more on advertisements on electronic and print media. Buhari, on the other hand, enjoyed the benefit of incumbency with the Ministry of Information highlighting the tenure achievements of the President, as well as various organisations and state branches of APC drumming support for Buhari’s party, the APC, which controls come 24 states.

The elections have also put the political future of particular members of National Assembly on the line. Not the least affected are Senate President Bukunola Saraki and House Speaker Yakubu Dogara. Both attained stronger political worth after quitting their former PDP party to help install the newly-formed APC. Both then sneaked into their respective National Assembly leadership positions and incurred the wrath of the APC leadership. Mutual anger and distrust, which ensued, compelled their return to the PDP. Unfortunately, especially for Saraki, the failed attempt to obtain PDP’s nomination for the presidential election badly halted his political rise not only at the national level but also back in Kwara State. Saraki may just make it back to the Senate but he is unlikely to be re-elected Senate President. Even if Saraki wins Kwara for Atiku Abubakar, such political feat may not stop Buhari from attracting more than the nominal 25 per cent votes. But winning Kwara for Atiku Abubakar remains a major task.

Saraki’s counterpart in the House of Representatives, Yakubu Dogara, is more vulnerable even to be re-elected to the House. It will be a major shock in the election if Dogara wins Bauchi State for Atiku Abubakar. Akwa Ibom is another state of interest for two main reasons. Former governor of the state and ex-minority leader in the Senate, Godswill Akpabio, who quit PDP, must prove his political worth to the APC while the party’s candidate, President Buhari, not only needs the electoral spread but also a substitute for the loss of any state his party may suffer in other parts of the country.

With APC completely out of every race in Rivers State except the presidency and with the big turnout of party enthusiasts for both Buhari and Atiku Abubakar, there is the inevitable battle for political supremacy between former governor of the state Chibuike Amaechi and his successor, Nyesoni Wike. Victory for one – that is, President Buhari or former Vice-President Atiku Abubakar – will be a near fatal political dent for the other.

Of major interest to observers are the home states of the two topmost candidates, each drawing about the heaviest crowd in the other’s state. Whatever may happen, Buhari will most certainly win home state, Katsina, in a big way since his party, APC, controls the state, and for a home lad, victory could never be less forthcoming. On the other hand, Atiku should also feel at home in Adamawa, except that with a risk. Adamawa is controlled by Buhari’s APC, a hangover from Atiku’s APC days. How far that may affect the results of the presidential election in the state is enough to cause sleepless nights in some quarters.

Benue and Plateau states, ordinarily, a year ago, appeared “no go” areas for Buhari. Miraculously, the same Buhari drew the largest crowd in Plateau during his campaigns. His mere appearance from his vehicle was enough for the people. Way back in 2015 at Maiduguri, it was the same show.

What can now be said of Benue State? Largely, owing to the hot and cold blowing of Governor Samuel Ortom, even his own political survival now depends on remarkable fortune. One moment, according to Governor Ortom, President Buhari is unacceptable and only short of evil, while the next moment, in Governor Ortom’s assessment, President Buhari “is our leader. He owns Benue State and can do whatever he likes with the state…” etc. Including shock victory reverberating even over the governorship race? Disagreement with erstwhile political god-father and former governor, Senator George Akume, the seeming undeclared kingmaker of Benue State who installed ex-Governor Suswam and after a fall-out similarly installed Governor Ortom as Suswam’s successor. Buhari’s possible victory in Benue State, if recorded, may just have dug Governor Ortom’s political grave. The situation will be clearer in the next 96 hours, especially if, in an addition to Buhari’s victory in Benue State, kingmaker Senator Akume also sails home in a return trip to the Senate.

Taraba State presents the conventional Chinese wisdom of “the enemy of my enemy is my friend. After serving as Minister of Defence in former President Obasanjo’s civilian administration, General Theo Danjuma became virtual mutual enemies and parted with such acrimony that he derisively reduced Obasanjo to “Aremu of Ota.” Danjuma also jointly endorsed Buhari’s victory in 2015.

But the same Danjuma since emerged as champion of Taraba State’s interests against the murderous cattle herders killing unarmed Nigerias along that part of the country. In fact, Danjuma advised Taraba indigenes to defend themselves. Danjuma also has not dissociated himself from the allegation of some Christian leaders that Buhari was plotting Islamisation of Nigeria. For that different reason, Danjuma is on the same wave length with his former boss Obasanjo in the battle to vote Buhari out of office.

That is the particular showdown presented by election results expected in Taraba State. Buhari drew unexpected large crowd at the campaigns. Yet, Taraba is under the control of opposition PDP. Is Buhari’s popularity in Taraba State stronger than the political/electoral influence of son of the soil, Theo Danjuma? Nigerians can’t wait too long for the results.

In this election, the entire South-East still seems impregnable for Buhari. For unstated reasons and despite overtures or even political baits, there remains the group political hostility. Construction of Second Niger Bridge, construction and re-construction of broken-down federal highways and offer of the Presidency to South-East in 2023. On the other hand, may be ideal for democracy or Nigeria will slide or creep to one-party state. It is usually a political choice guaranteed under the Constitution.